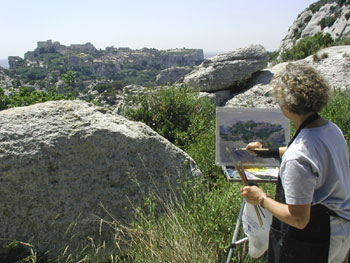 The formalized art education of Margaret B. Dean took place at a small liberal arts college in New Rochelle, New York. Here, under the tutelage of Earnest Thorne Thompson, she was not only exposed to many facets of the creative process, but also followed the necessary curriculum to certify her as an art teacher in her home state of Connecticut. After graduation, she was employed by the Farmington, Connecticut Board of Education, and taught for a number of years in their school system. Further education also took place at this time at Central Connecticut State University. Their final requirement for the art education masters program there, resulted in her first one-man show in oil painting.

Marriage, family commitments, and relocation several times in the following years left her little time to pursue her own personal goals at this time. It was not until she enrolled in several courses in the Lyme Academy of Art in Lyme, Connecticut that she was able to continue with her love of oil painting. Several instructors there, were very influential in her development and Margaret credits the commitment at the Academy to strong academic training as having a positive effect on her work.

More recently, the artist has discovered the plein air genre of art. She has been fortunate enough to continue study with some of the best nationally known instructors who share this commitment to working on location. She strongly believes that this aspect of painting not only provides her with the greatest of challenges, but also the richest rewards.

Margaret is an elected member of the Lyme Art Association and the New Haven Paint and Clay Club as well as several Connecticut shoreline art leagues. She is very proud of her national affiliations with the Oil Painters of America and the American Impressionist Society, where she recently earned signature status. She resides on the beautiful Connecticut shoreline where she enjoys sharing with her students her love for capturing “that moment in time". 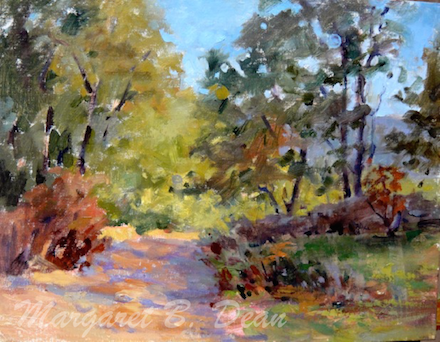 My involvement with the "plein air" tradition started many years ago as an undergraduate. Although we didn't use that exact terminology at the time, the outdoor painting classes required by the art department were definitely my initiation to creating on location. I was intrigued from the start, and now prefer that methodology almost exclusively. Nothing else even comes close to inspiring me in the same way.

I have given much thought into keeping this challenging approach simple while pursuing it outdoors. At the present, I work fairly small and use a limited palette of colors. My French easel also helps keep it simple. While on location an artist needs to set up easily and make decisions quickly. Not only does the light change constantly, but, it can play tricks with colors and values. I am often challenged by the elements themselves. Even keeping it simple does not slow down the ever-changing light.

The difficulties of on-site painting are nevertheless more than worth the effort. This is where glimpses of amazing beauty can be found and where inspiration is endless. When the timing is right, and the many facets of this approach come together, the inspiration, these "moments in time" can be caught and put down for all to see. I dare to hope that these personal experiences can transcend the moment.

I approach every new painting location with great anticipation. Each of these on-site creative challenges is so unique and special. My goal is to touch you, the viewer, through the marks of my brush. I invite you to enjoy each of these artistic journeys and become one with my moment in time. May you complete the creative process!

Margaret Dean is an elected artist member and past president of the Connecticut Plein Air Painters Society. She is also an elected member of the Lyme Art Association and the New Haven Paint and Clay Club as well as several Shoreline art organizations. She is very proud of her national affiliations, The American Impressionists Society, where she has recently earned Signature status, and the Oil Painters of America.

©2022 Margaret B. Dean. All right reserved. These images may not be reproduced in any manner without written permission from the artist.